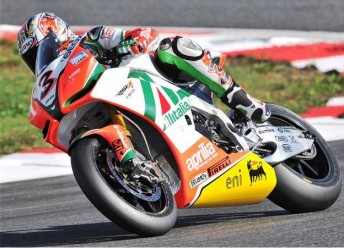 Yamaha Sterilgarda’s Cal Crutchlow and Aprilia’s Max Biaggi each shared wins in the final races of the 2010 World Superbike Championship at Magny-Cours in France.

Not only did Biaggi clench the 2010 championship, the Italian also took home Aprilia’s first ever manufacturer title in World Superbikes.

Crutchlow secured a decent start from pole position. However, the Brit was unable to prevent Biaggi from jumping into the lead by the first corner. After that Crutchlow lost even more ground as Suzuki’s Sylvain Guintoli and Ducati’s Michel Fabrizio snaked their way through. Refusing to settle, Crutchlow squeezed every bit of horsepower out of his Yamaha YZ-F R1 to take the fight up front, and a few laps later he was back up to second and pressuring the 2010 champion for the lead.

Crutchlow managed to overtake the champion through the hairpin section on Lap 8 and then began distancing himself from Biaggi. The MotoGP-bound Yamaha rider created an advantage that none could overthrow, while Biaggi became caught in a tense battle for second with Fabrizio, Guintoli and Haslam.

Max Biaggi cleared enough points in the first race to secure the 2010 manufacturer title for the Aprilia team. 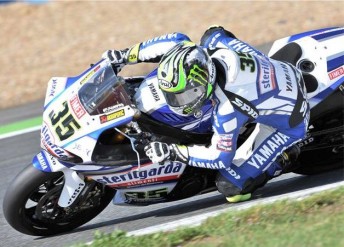 “It was a weird race for me really, leading from the front for most of the race,” said Crutchlow.

“I didn’t think anybody would break away, Max seemed to be holding the group up so I though let’s get in front of him. I thought he or the group would come with me, but I managed to pull out a gap. All credit to Sterilgarda Yamaha, we did a good job in this race.”

Haslam made some impressive passes in the final laps to take a well-earned second.

Meanwhile, Biaggi had to settle for fourth after being driven to the curb by Haslam as he made his pass. It wasn’t too much of a disappointment to the champion, however, who still secured enough points for Aprilia to wrap up the 2010 Manufacturer’s Championship.

Following a drive-through penalty, Guintoli was removed from the results classification after repeatedly ignoring calls and refusing to heed to a black flag. As a result, Czech rider Jakub Smrz moved into his fifth-place position.

Biaggi capped off the end of the season in style by taking the final win of the year. The Italian had already won both the rider’s championship and the manufacturer title, but posted an incredible ride to claim victory in the 2010 finale.

“We were a lot stronger than in the first race and yet the competition was always right their snapping at our heels. My cold didn’t let up at all and after the halfway point of the race I was struggling to breathe and sincerely couldn’t wait to get to the last lap.

“It’s nice to end this season with a win after the first-place in the rider and manufacturer standings: the celebration was for me at Imola, but today it’s my team’s turn. They have worked hard and they deserve this success, from the mechanics to the engineers to Noale who follow me track after track.”

After taking a win in the first race Crutchlow put in another strong ride in Race 2, finishing second by only 0.087 seconds. As a result the British rider established a firm lead over Ducati’s Noriyuki Haga in the championship, and finished fifth overall in the series.

Rounding out the Race 2 podium was Ducati’s Fabrizio, who made his way past Guintoli in the final chicane.

Suzuki’s Leon Haslam took 10th in the last race, and finished second overall this season with 376 points. After Honda’s Jonathan Rea did not participate in the final round, Checa jumped ahead of the Irishman in the championship by five points, and finished third in the series.