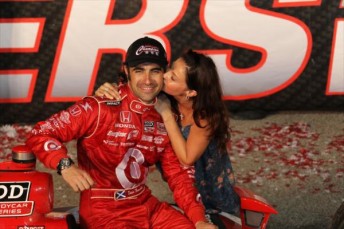 Scotman Dario Franchitti has clinched the IZOD IndyCar Series for the second consecutive year after Australian Will Power’s hopes ended up against the wall of the Homestead Miami Speedway today.

Power scrapped the wall on lap 136 of the 200-lap event and damaged his right rear suspension enough to force him out of the race. The Penske Racing crew push Will Power behind the wall

The talented Toowoomba-born ace was forced to watch on from the Team Penske pit box as Franchitti cruised to eighth place and the “big trophy” – he only had to finish 10th or better once Power was classed as a non-finisher.

Franchitti reduced Power’s championship lead from 12 to 11 points after taking pole the previous day and then to 10 points by leading the most laps. In the end he clinched the title by just five points. Franchitti’s teammate Scott Dixon made it a big day for Team Target by winning today’s race and clinching third in the championship.

The championship capped off a massive year for team owner Chip Ganassi who also won NASCAR’s Daytona 500 with Jamie McMurray in February, the Indy 500 with Franchitti in May, the NASCAR Brickyard 400 with Juan Pablo Montoya in August and the Rolex Grand-Am title with Scott Pruett.

“The season obviously had some high points, but there were plenty of low points and we just had to keep working,” said Franchitti, as he collected the $US1 million bonus championship cheque.

“To get here tonight is testimony to the Target team and the determination of everyone involved.”

Dixon was obviously delighted to finish the season with a win and jump into third in the championship standings.

“It has been a crazy race, but obviously we could see things unfolding as the race went on, with Will dropping out etc,” said Dixon.

“Overall it is a great day for Team Target and I am just happy to be driving the #9 car.”

For Power, he was left to wonder what could have been.

“It is just disappointing, what more can I say,” said Power.

“I was going around some back markers and you just don’t know what they are going to do. I got up too high pushing on trying to catch the Ganassi cars which had so much speed today.”

Will Power talks after the race