Not only did Brabham win his second championship, sharing it with his co-driver Simon Pagenaud from France, but his Patrón Highcroft Racing team won the teams and the manufacturers titles for the second year running.

Brabham and his team mates Simon Pagenaud and Marino Franchitti finished the gruelling 1000 mile Petit Le Mans race in overall fourth.  It was the first of its class home, beating Championship rival Klaus Graf, who crossed the finish line in seventh. 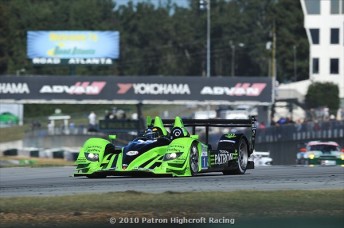 Brabham at the wheel of his Patrón Highcroft Racing team machine

Throughout the season, Brabham and regular co-driver Pagenaud were on the LMP2 podium in every race, scoring four wins, four seconds and a third placing, in what was a near perfect Championship defence.

“It’s an amazing feeling and such a great accomplishment to clinch back-to-back titles,” said Brabham

“It’s not an easy thing to do, but we did it by delivering a faultless race to finish the year on a massive high.

“We took the title exactly the way we wanted to. We made sure that we treated this race like every other and concentrated on winning. As soon as you start talking about potential issues, you can create them. Instead, we decided to do what we have been doing all season and it certainly paid off.

“This team has done a stellar job all year. We’ve finished on the podium every race so full credit must go to the entire Patrón Highcroft crew.”

“My focus is already on flying to Australia on Monday to race the Bathurst 1000 and I’m looking forward to doing the best job I can there and spending time with my family.”

Brabham teams up with Alex Davison in the #4 IRWIN Racing Ford Falcon at Bathurst.

Practice for Bathurst starts at 10.15am this Thursday with the race commencing at 10.30am on Sunday.