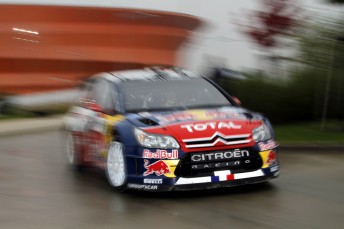 Defending six-time World Rally Champion Sebastien Loeb emerged from the end of the first day of Rallye de France a relieved man. He leads, but it hasn’t been easy for the local hero.

After winning every stage through the morning, the Citroen driver found roads in a quite different state when he returned in the afternoon. With the entire 67-car field having passed through, the corners were covered in mud and offering nothing like the grip they had on the first lap.

Despite the change in conditions, and the fact that he was only fastest on one of the afternoon’s stages, Loeb still managed to stretch his lead by six seconds, to arrive back in Strasbourg with a 22.7-second advantage.

“I am glad to be out of that last stage,” said Loeb.

“It was a good day, but the last stage was so tricky, it was very difficult. We had to be really careful, I think we lost 40 seconds, so if somebody coming from behind wants to push maybe they can take me. But I’m happy to be here.”

The start of the last stage of the day was delayed by 58 minutes while the event organisers moved the vast number of spectators into safer areas.

The men on the move through the afternoon were Loeb’s Citroen Total World Rally Team team-mate Dani Sordo and Ford’s Jari-Matti Latvala.

Sordo was either fastest or second fastest through the first three stages of the afternoon to close on and pass Petter Solberg and Sebastien Ogier. Having struggled through the morning, Sordo was much more upbeat at the day’s end.

“It’s an interesting fight, very close. It was very difficult for the road position this morning, but tomorrow it should be better for me.”

It was the same story for Latvala, who felt the narrower sections of the day were suiting the Ford much more.

“The car is working really well in the narrow and slippery sections,” said Latvala

“The last stage was so, so slippery.

“But it seemed to suit our car; the car is working really well in these conditions.” Yvan Muller will return to Rallye de France on day 2

Latvala’s reward for a stellar performance in the super-slippery stages was to move up to fourth, edging Petter Solberg by four seconds into the second day.

Latvala’s team-mate Mikko Hirvonen’s had a troubled day. He would end Friday close to two minutes off the lead, bouncing the car off the mountainside on one stage didn’t help, damaging the wheel rims on the car. He was sixth on Friday night.

World Touring Car star and former winner of the Sandown 500 V8 Supercar race, Yvan Muller, will restart on day two after retiring on Friday morning with a fuel-related problem.

The World Touring Car Championship ace is making his WRC debut this weekend on what is only his sixth ever rally and was in 12th overall after four stages.

However, he failed to make it to the remote service zone in Mulhouse when his Citroen Xsara WRC suffered what the 41-year-old Frenchman described as a “fuel consumption problem”.

“I’m disappointed because my car stopped 100 metres from the control board and I am from Mulhouse and I really wanted to go to the town with all my friends watching,” said Muller.

“I was going step by step on my speed and I was looking forward to the second pass. When you start 13th the road it is a nightmare. I knew the second run would be better for me and more equal with the guys in front.

“For me rally is very new and I have to learn everything so in these conditions that was quite complicated.”