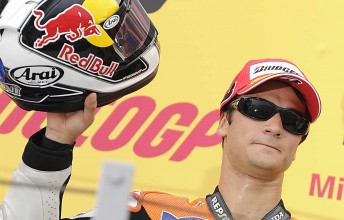 The Honda rider crashed early in the first practice session courtesy of a stuck throttle, and was subsequently ruled out of competing in Sunday’s race.

A run of two wins and two second places in the last four Grands Prix had seen Pedrosa close to within 56 points of Lorenzo’s championship lead.

With five races remaining, Lorenzo has an unassailable lead over third placed man Casey Stoner, and may officially seal his first premier class title as early as the Malaysian Grand Prix next weekend.

Before flying back to Spain for surgery, Pedrosa commented on the crash through an official statement from Honda.

“It was a strange crash in only my second full lap, in a slow section of the track,” he said.

“I tried to stop the bike as usual, but I knew something was wrong and couldn’t avoid going down.

“After the crash I knew immediately that I was injured because it was very painful. I had a big impact in my left ankle and also my collarbone was broken as I hit the track – so obviously it feels very unlucky because recently we have had really good results.

“Another injury to contend with is really not what I needed – I don’t feel as though I deserve it.”

While the dual 250cc World Champion has been the class of the field so far this season, his championship year will be remembered for the injuries to both Pedrosa and Valentino Rossi, who damaged his shoulder pre-season, before breaking his leg at Mugello in June.

“Well, obviously the best way to win the world title is with all the riders at the best conditions and all the riders competing, but races are like that and everybody gets injured sometimes in racing,” said Lorenzo.

Lorenzo ended Friday practice at Motegi third on the timesheets, behind pacesetters Rossi and Andrea Dovizioso.