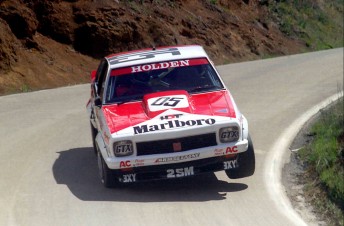 7Mate will screen a Bathurst Marathon including Peter Brock's '79 victory

Overnight this Saturday there is an absolutely MUST SEE program being aired on the all-new 7Mate Channel on the Seven and Prime TV Networks.

Bathurst – the Great Race Marathon will air from 12.30am Sunday morning through to 5am.

Hosted by Neil Crompton – unfortunately not in the classic Seven Sports ‘Racing Red’ blazer! He will take race fans through extended highlights of the following years in this order:

* 1979 – When Peter Brock and Jim Richards smashed the field by six-laps and Brock set the fastest lap of the race on the final lap!

* 1977 – Ford’s most famous win at Mount Panorama when Allan Moffat & Jackie Ickx took victory in the closest ever finish from Colin Bond and Alan Hamilton!

* 1975 – Peter Brock as a privateer showed he was still very much the man when he combined with Brian Sampson to win during Seven’s first ever colour telecast!

* 1992 – The final race for the Group A Touring Cars. Tragedy and triumph was the theme of the day as the Nissan GT-R of Jim Richards and Mark Skaife took victory after a red flag ended the race while Godzilla was parked against a concrete wall on Conrod Straight!

Highlights are direct from the Seven archives. So this is more than what you might have seen on a DVD compilation!

As well as the stars and cars of the era look out for some of the great Seven commentators including Mike Raymond, Garry Wilkinson, Mark Oastler, ‘Uncle’ Doug Mulray, the late Evan Green, Englishman Richard Hay and US broadcaster Chris Economaki.

Word is that a good response to this program could see more classic telecasts screened on 7Mate.

You can also catch Crompton and L&H Phillip 500 winner Mark Skaife, along with Josh Dowling and Greg Rust on Triple M in Sydney, Melbourne and Brisbane on the ‘Stick Shift’ for two hours every Saturday morning. Guests this week include Mark Winterbottom of Orrcon Steel Ford Performance Racing.

Home page and podcast information of the ‘Stick Shift’ can be found here.

Here is a teaser including a classic Seven Sport intro