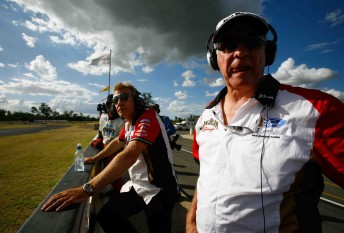 Dick Johnson Racing is set for a new co-owner with one of Australia’s richest men poised to purchase a half-stake in the famous Ford team.

On the eve of the Supercheap Auto Bathurst 1000 – the race where Dick Johnson made his name – the Jim Beam-backed team will be co-owned by Johnson and mining magnate Nathan Tinkler.

The pair will each hold a 50 percent share in the operation with Tinkler buying out former owner Charlie Schwerkolt’s share of the team.

The V8 Supercars Australia board hooked up by phone today to approve the deal, but no parties are prepared to comment in detail until final settlement, which is expected within 24 business hours. With a public holiday in NSW on Monday, it is likely the deal will be sealed on Tuesday. 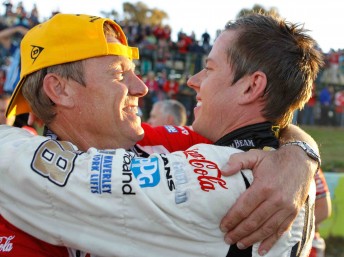 This will mean that Tinkler is almost certain to be in Jim Beam colours in the DJR garage at Mt Panorama next week.

The news comes after months of speculation that Schwerkolt was on the verge of buying out Johnson’s share of the team and the possibility that the DJR brand could dissolve in its 30th anniversary year.

Tinkler’s part acquisition of DJR, which currently leads the V8 Supercars Championship Series with driver James Courtney, will top off a big couple of weeks of sports spending for the 34-year-old.

The Hunter Valley-raised mining magnate bought the Newcastle Jets A League football team on September 22 and is also a prolific owner of champion race horses.

Tinkler was ranked in the BRW Rich 200 list as one of the richest men in Australia earlier this year with an estimated personal wealth of A$355million. 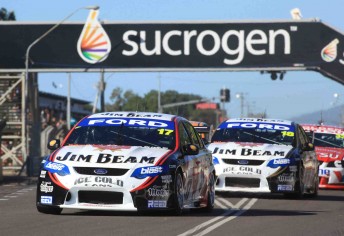 That was updated drastically by the Fairfax Media-owned financial publication to $610million when the former electrician topped this month’s BRW Young Rich listing as the richest Australian under 40 years of age.

Tinkler is both a motorsport fan and competitor and actually shared a FPV FG with Steve Johnson in the 2009 12 Hour event at Bathurst.

At the time of writing, Johnson and Schwerkolt could not comment on details. Johnson did tell Speedcafe.com.au that he expects nothing to change within his championship-leading team, while Schwerkolt said he would be turning his focus to his forklift business.

Schwerkolt bought into the Queensland operation early in 2008. Since then, he has helped take the team from the financial ruins to race winner and championship leader.

It is believed that the purchased will see no immediate internal or external changes to the team, including drivers, management and commercial partners.

To find out more about Nathan Tinkler CLICK HERE for Speedcafe.com.au’s background story on the newest team owner in V8 Supercars.