Simonsen gets back into V8 mode with test

Simonsen gets back into V8 mode with test 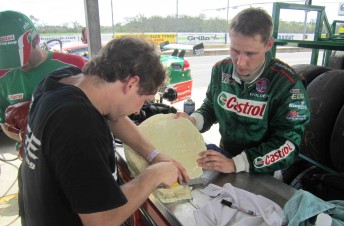 Allan Simonsen got reacquainted with a Triple Eight-designed V8 Supercar at Queensland Raceway yesterday ahead of next week’s Supercheap Auto Bathurst 1000 at Mount Panorama.

The Danish international driver completed 50 laps at the Ipswich circuit in the Castrol EDGE Commodore VE that he’ll share with Greg Murphy at Bathurst.

Simonsen, Murphy and TeamVodafone star Craig Lowndes all had stints in the #51 machine, with Lowndes completing a short five-lap systems-check.

After using a special seat mould for the morning’s session, Simonsen and Murphy found a compromise on their seating position, leading the Dane to be optimistic on his chances with the Kiwi legend ahead of The Great Race. “This year I’m with a new team but everyone has been so nice and helpful so it almost feels like I’ve been here for a long time,” he said.

“We used the test to get in Bathurst mode, running in parts and getting used to driver changes. It all felt really good.”

While Simonsen has been out of a V8 seat for 12 months, he does have a lot of experience in Triple Eight equipment.

“Having driven a Triple Eight car for the past few years I know they have very good stuff and it’s always a pleasure to drive them,” he said.

“Paul Morris Motorsport does a very good job and I’m confident that we will do what’s needed for Bathurst.”

Other teams at Queensland Raceway doing their final pre-Bathurst test was TeamVodafone and the Fujitsu-backed Fujitsu Series entry of Scott McLaughlin at Stone Brothers Racing.