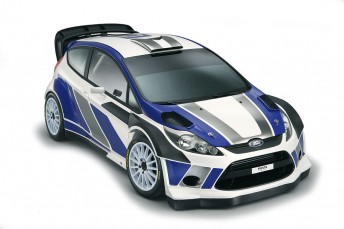 The Fiesta RS WRC will make its competition debut in Rally Sweden, the opening round of the 2011 FIA World Rally Championship, on 10 – 13 February. It will be seen outside Coffs Harbour at Rally Australia on the second week of September.

For Paris, the preview model has been finished in a striking blue and grey livery, specially developed for the show by Ford of Europe’s design team.  The new World Rally Car, derived from the best-selling Fiesta road car, is being developed by Ford of Europe and its rally partner M-Sport.

Using as a base the Ford Fiesta S2000 rally car, which won the Intercontinental Rally Challenge (IRC) Monte Carlo Rally on its debut last January, Ford of Europe’s design team and M-Sport have worked together to fine-tune the styling of the bodywork and aerodynamic package of the new Fiesta to create an exciting replacement for the outgoing Focus RS WRC.

Although detailed changes may be made as the Fiesta RS WRC car continues its development programme through the balance of this year and in time for the commencement of the team’s specialised pre-season testing, the final car will share the eye-catching appearance.

The Fiesta RS WRC competition car will form part of a new era for the world championship.  The Fiesta rally car will boast four-wheel drive transmission and a 1.6-litre turbocharged engine, based on the all-new Ford EcoBoost engine family, to comply with new regulations.

Specialist engineers from Ford and M-Sport have co-operated closely in the development of this 1.6-litre engine, with highly-respected French tuner Pipo Moteur bringing additional expertise to the power plant. 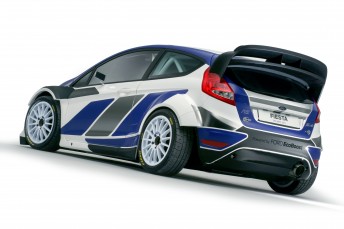 “There are significant visual differences from the Fiesta S2000 base car as well as major changes under the skin,” said Gerard Quinn, Ford of Europe’s Motorsport chief.

“The biggest, of course, is the 1.6-litre Ford EcoBoost turbo engine – the original version of which was developed by Ford’s Powertrain Engineering team.”

The Fiesta RS WRC appearance at the Paris Motor Show precedes the car’s first major test programme with the full 2011 engine specification on gravel roads in Spain next week.  The car has already completed almost 3000 kilometres of testing in Britain and France, powered initially by the current WRC engine and more recently by a prototype 1.6-litre Ford EcoBoost turbo unit.

“This is a thrilling time for everyone involved in the car’s development,” said Wilson.

“We are right on track with our development and the team is delighted with testing to date.  Another major step forward will be taken at the start of October when the car tests in full 2011 technical specification for the first time.

The Fiesta RS WRC will replace the record-breaking Focus RS WRC as Ford’s championship challenger.  The Focus RS WRC won back-to-back manufacturers’ world titles in 2006 and 2007, and its victory in New Zealand in May was the Blue Oval’s 75th at WRC level, making Ford the most successful manufacturer in world championship history.

Unveiling at the Paris Motor Show