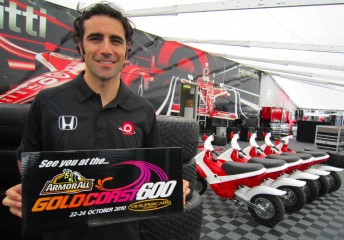 IndyCar title contender Dario Franchitti has one thing on his mind at Homestead Miami this weekend – beating Australian Will Power and winning the 2010 IZOD IndyCar Series – but the Scotsman is also thinking beyond then.

The reigning Indianapolis 500 winner says that this year’s Armor All Gold Coast 600, of which he’ll be a part of, has the makings of “the greatest touring car race the world has seen.”

The Ganassi driver is one of 18 international stars that will co-drive with the regular V8 stars at the V8 Supercars Championship Series on October 22-24. He is a former winner of the Gold Coast Indy-style event (1999) and says he wants to “win again” – but this time, in a V8 Supercar.

Franchitti says that the event is going to be “special.”

“The amount of interest this event has generated internationally in a short amount of time has been amazing,” said Franchitti.

“When you look at the cars, the drivers, the fan base and the event I cannot think of another touring car race anywhere or at anytime that comes close to what this will be.

“The Gold Coast event is one of the most special in world motorsports and to have the chance to go back down there and race – in no less than a V8 Supercar – is going to be something pretty special.

“When I was first contacted about the idea, I thought it was fantastic.”

The two-time defending IZOD IndyCar Series champion and two-time Indy 500 winner considers the Gold Coast event to be one of the best in world motorsports, but he did not expect to compete there again after the race was dropped from the IndyCar schedule in 2009.

“Do I wish that the Gold Coast race was still part of the IndyCar Series? Of course I do, but that is not possible for a lot of reasons,” said Franchitti.

“For me, this is the next best thing. I have always been a fan of V8 Supercars and I’ve been bugging a few friends in Australia for a drive at Bathurst for a few years, but dates have never fallen in my favour.

“To be back in Surfers Paradise in a V8 Supercar is going to be cool and there is not one international driver in the field that I have spoken with who is not serious about winning the event – and that goes double for me.

“To win at Surfers Paradise in both a Champ Car and V8 Supercar would be something pretty special, but with the competition and the talent level in this year’s field, not to mention the challenge of getting up to speed in a V8 Supercar, it will be a difficult task for sure.”

The event will feature 18 international drivers alongside the V8 Supercar stars by day, and 16 International and Australian acts by night, in a continuance of V8 Supercars’ Rock ‘n’ Race format.

See below for the list of international drivers and the teams they will compete with at the Armor All Gold Coast 600.