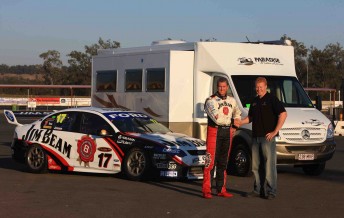 Camping at Bathurst is not something you would generally associate with a V8 Supercars driver, but there are a growing list of drivers who are taking up the past time.

TeamVodafone’s Craig Lowndes is famous for it. The four-time Bathurst winner has spent the last few years camped behind the V8 pits, spending the nights with his family in their own mobile home.

And it seems to work for Lowndes. He has won three of the last four races …

This year, Jim Beam Racing’s Steve Johnson is hoping some of that winning luck will rub off on him, setting up base in the V8 paddock at the Supercheap Auto Bathurst 1000 at Mount Panorama.

Johnson has always driven from his home on the Gold Coast to the track, but this year, he’ll be doing it in a fully-equipped Inspiration Supreme motor home built by Gold Coast-based Paradise Motor Homes.

“I need somewhere to get away when I’m not actually on driving duty and what better place than my own motor home,” said Johnson.

“The Inspiration Supreme is quite simply the best I’ve seen.”

Taking a private motor home to race tracks isn’t a new concept. Formula One and NASCAR drivers employ this for the majority of their races.

Johnson’s vehicle will remain in the paddock of the circuit throughout the weekend, offering him, his wife Bree and their family a haven from the pressures of the 1000km race only a few metres away from the team garage.

On a try-out run during a race car practice session at Queensland Raceway recently, Johnson pronounced the Inspiration Supreme to be exactly what he needs.

“I have a heavy vehicle licence, but it is not necessary with the Inspiration Supreme. It’s as easy to drive as a car,” he said.

“The motor home gives me a special edge for the big race this year. I will be even more relaxed and focussed on the task of winning.”

The Supercheap Auto Bathurst 1000 kicks off next Thursday at Mount Panorama.