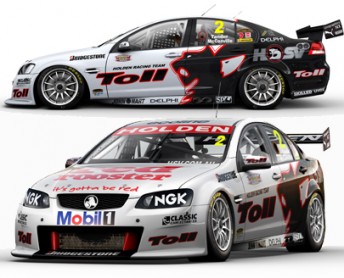 One the eve of defending his Bathurst crown, Tander says that he loves the look of his ‘retro’ Commodore VE II.

“I consider driving for Holden’s official factory team a great honour and I am quite proud that we will be defending our Bathurst crown while celebrating the 20th anniversary of the beginning of HRT’s winning heritage,” Tander said.

“It is a fitting tribute – the cars look fantastic, the driving suits and team uniforms are retro cool and I know our fans will love it.”

Tander will be partnered by Cameron McConville in the #2 entry, while the sister #22 car will be driven by Will Davison and David Reynolds. At Bathurst, the team’s two Series II Commodore race cars will sport the team’s original livery which Allan Grice and Win Percy carried on their way to the team’s first victory in the 1990 Great Race – the same year that HRT began.

Since then, the Toll HRT has gone on to record more championships and race wins than any other team in ATCC/V8 history.

Davison said he was looking forward to honouring Grice and Percy’s winning efforts.

“Winning Bathurst with the Toll Holden Racing Team was not only a career defining moment for me, but also a revelation as to just how passionate our fans have become about HRT – it’s ‘their’ team,” Davison said.

“Going back to Bathurst with the same livery that Gricey and Win carried to victory will be a very special occasion for everyone and I hope we can do it justice by repeating the results of 1990 and last year by bringing the Peter Brock Trophy back home.”

The 2010 Supercheap Auto Bathurst 1000 takes place at Mt Panorama, Bathurst, from 7-10 October with the Seven Network broadcasting 19 hours of live coverage across the event.

For more with Tander CLICK HERE for today’s Cafe Chat …