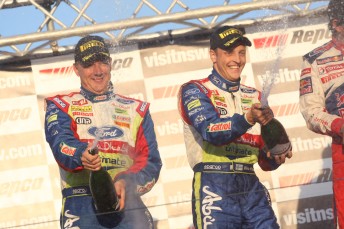 Australia’s round of the FIA World Rally Championship, Rally Australia, has been relocated to Coffs Harbour from 2011 onwards.

Rally Australia started in 1988 in West Australia and became part of the WRC the following year in 1989. The event remained in WA until 2006 before moving to the New South Wales’ Northern Rivers region last year.

The event is now on a year-by-year rotational basis with New Zealand, and after Australia missed out this year, Rally Australia returned to the east coast in 2011 at Coffs Harbour – a city steeped in rally history.

The switch of venues was finalised at a meeting of the FIA WRC Commission in Paris yesterday.

CAMS President Andrew Papadopoulos said that he was disappointed to leave the Northern Rivers region, but the new location would allow the event to be designed on more compact lines and would bring to competitors and manufacturers in the WRC some of the most exciting and spectacular rally stages Australia could offer.

“We are disappointed to be leaving the Northern Rivers area,” he said.

“We had very strong support there from the councils of Tweed and Kyogle, the local businesses and the majority of residents and I thank all those people for their support.

“However, during this year we have in conjunction with our sporting officials and independent consultants and with considerable feedback from the FIA, North One Sport (the commercial rights holder for the World Rally Championship) and various teams and manufacturers, come to the conclusion that despite the overwhelming support we received, it is simply not feasible or practical to locate the event there in the future.”

The Mayor of Coffs Harbour City Council, Councillor Keith Rhoades said that the region will receive a huge boost.

“This is an absolutely fantastic opportunity for the Coffs Harbour region,” he said.

“The World Rally Championship is broadcast in 186 countries and has a global audience of 53 million viewers. From an economic perspective, we would see around $15 million directly injected into the local economy through this one event alone.

Planning for the rally will commence immediately with extensive community consultation with all affected parties in particular the local councils in relation to the choice of the exact route and location of event infrastructure such as the Service Park, Media Centre and Rally Headquarters.

The date of the event will be finalised soon pending discussions with television networks, the WRC Commercial Rights Holder (North One Sport) and the FIA, plus local resorts and businesses.

It is believed that September will be an ideal time to host the event.

Coffs Coast has played a major role in Australian rally history, hosting many competitive stages of the famous International Southern Cross Rally in the 1960s and 1970s and more recently, regularly hosting a round of the Australian Rally Championship.

The area, with its myriad of well-maintained gravel forestry and shire roads, is regarded as having some of the best rally stages in Australia.