The Toll Holden Racing Team has unveiled its special anniversary livery that it will debut at next week’s Supercheap Auto Bathurst 1000.

To honour the team’s 20th anniversary, both the #2 and #22 Toll Holden Racing Team Commodore VE IIs will run a livery paying tribute to the livery that HRT campaigned in 1990 – the team’s first official year in Australian Touring Car racing.

The cars will be driven by Garth Tander/Cameron McConville (#2) and Will Davison/David Reynolds (#22).

For the Gold Coast race, McConville will remain with Tander, while Reynolds will step aside for Australian IndyCar international star Ryan Briscoe to race with Davison. 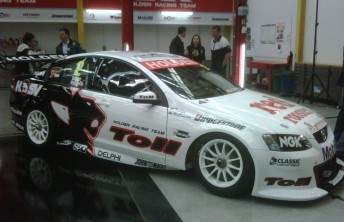 The new look for Toll HRT at Bathurst

The 1990 season was a special debut season for HRT. Win Percy and Allan Grice won the Tooheys 1000 at Bathurst in the Holden VL Commodore SS’s final race as a factory car. The team’s sister car of Neil Crompton and Brad Jones finished fifth.

For more with Tander CLICK HERE for today’s Cafe Chat …

See below for the final laps of the 1990 Great Race, featuring the stunning victory for Allan Grice and Win Percy in the HRT Commodore VL.