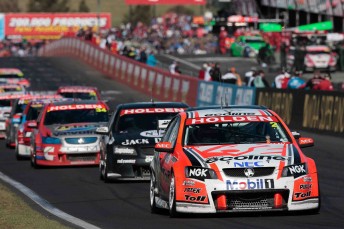 The first official entry list for next week’s Supercheap Auto Bathurst 1000 has been released.

No change to this list of drivers will be accepted later than 5pm, Tuesday 5 October unless exceptional circumstances.

As per usual endurance races, each two-car team has listed three drivers in its line-up.

The ‘Primary’ driver is listed as Driver A, while the co-driver is Driver B and/or C.

According to the race’s supplementary regulations, all teams must nominate their final driver pairings in writing to the Operations Manager no later than 5.30pm on Thursday, October 7.

No major changes have occurred to the field that lined up at the L&H 500 at Phillip Island. Unless a team switches its co-driver pairings, the only changes will be Ryan Briscoe (Bundaberg Red Racing) and Allan Simonsen (Castrol EDGE Racing).

Stay tuned to Speedcafe.com.au for the latest in pre-Bathurst 1000 news.

And for more in the lead-up to The Great Race, CLICK HERE for Aaron Noonan’s weekly column …