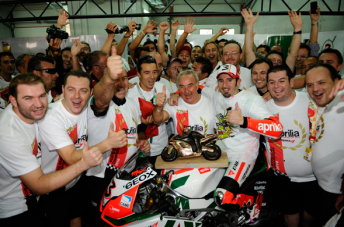 Max Biaggi and the Aprilla team celebrate their world title

Italian Max Biaggi has secured the World Superbike Championship at his home track at Imola – his fifth world title in total, adding to his fourth 250cc crowns.

After a long two wheel career, Biaggi sealed the crown with an 11th and fifth place in the two races at Imola, becoming the first Italian to win the World Superbike title.

The fifth place in Race 2 for the flamboyant Aprilia Alitalia rider was enough to ward off the challenge of Leon Haslam.

“This is fantastic. It’s like a dream come true, I never stopped to dream to make it happen.”

At one stage, it had looked like Biaggi would have to wait until the final round next week at Magny Cours, France, to officially claim the title after his 11th place in Race 1. Suzuki’s Haslam needed to finish ahead of Biaggi in Race 2 to keep the title alive, but after a mistake, then an engine failure his challenge.