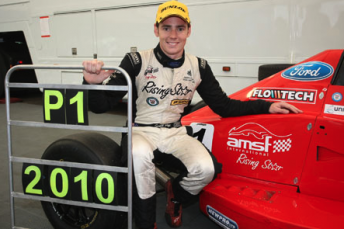 Scott Pye has become the first Australian since James Courtney in 2000 to win the Dunlop MSA Formula Ford Championship of Great Britain.

The Jamun Racing team driver who hails from South Australia moved to the head of the driver standings following a dominant victory in Saturday’s 24th round.

In the last race of the year, Pye only needed to finish seventh or better to claim the title – and second place was enough to lock him in as the champion, 19 points ahead of year-long rival Scott Malvern.

The win is Jamun’s sixth-consecutive crown.

Pye was ecstatic with the result.

“It’s difficult to put into words – to win the championship is absolutely fantastic,” he said.

“Our season started on such a high at Oulton Park with a win, and to finish on the podium here at Brands as champion is an amazing way to cap a brilliant year.

“Our main goal is British Formula 3 next year. I’d really like to try to follow in Daniel Ricciardo’s [2009 British F3 Champion] footsteps I guess, and try to win that championship.”

With 12 race victories, 18 podiums in total and 16 pole positions, it’s been a truly outstanding season for the 20-year-old from Mount Gambier.

Malvern later said that Pye was a “deserving champion.”

“The team and I have worked so hard as we’ve been on the back foot from the start. The Ray isn’t developed entirely, certainly not as much as the Jamun Mygales are, and I’ve been fighting against Scott, who is a lot more experienced than me. Congratulations to him, though, he’s a deserving champion.”

In the Scholarship Class, Raysport’s Tristan Mingay was crowned champion during Saturday’s penultimate round.