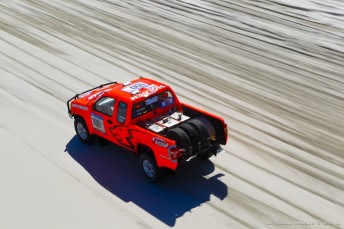 Craig Lowndes on his way to victory in Esperance

Craig Lowndes has won the Australasian Safari in Western Australia.

After taking first place with Kees Weel, the V8 Supercar star dedicated his victory in the gruelling event to his mentor, the late Peter Brock.

Driving a Holden Colorado, Lowndes crossed the finish line in Esperance to claim victory by 1 hour 12 minutes and 44 seconds, the Nissan Patrol of Victorians Darren Green and Wayne Smith second.

Driving a specially modified V8 Colorado, Lowndes and Weel dominated the Safari winning nine of the 17 competitive stages run, covering 3,600 kilometres through the WA bush during the last seven days.

“Peter [Brock] loved the Safari and tried to win it a number of times, so it’s a great sense of achievement to be able to complete some of his unfinished business,” Lowndes said. 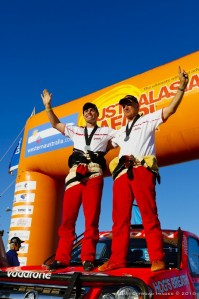 Lowndes and Weel on the podium

“I was new to this event, an unknown quantity, and pretty much unprepared for what we were faced with. I had only done two days of testing, and I even rolled the Colorado on the first.

“I knew it was going to be tough, the Safari is a complete 180 to what I am used to in V8 Supercars, it was as tough an event as I’ve ever done, like getting up and doing the Bathurst 1000 every day.

“But Kees and our crew had the experience and our equipment was good enough to win, so the victory is a credit to Kees, the PWR Holden Rally Team, and the durability of the Colorado. It’s a great accomplishment for the whole team.”

Lowndes now turns his attention to next month’s Supercheap Auto Bathurst 1000. Along with Mark Skaife, the TeamVodafone driver will be one of the favourites after victory in the warm-up to Australia’s great race, the L&H Phillip Island 500 just two weeks ago.

Bathurst’s Ben Grabham made it a trifecta for himself and the CPW Safari /SP Tools/KTM Racing Team when he took out first place the moto division today.

Grabham was in the lead in all but one Leg this week, finishing convincingly today an overall 17 minutes ahead of the next fastest Todd Smith.

“It was a fun way to finish, riding across the sand dunes and the beach, although getting through the sand was a bit tough,” said Smith.

“After all the hard work, it’s a big relief it’s over not just for me but also for the mechanics and the whole team.” 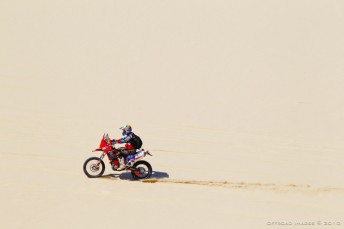 Todd Smith completed a gritty performance placing second despite nursing a shoulder injury sustained on the first day of competition and having his brother Jacob out of the event with a broken ankle.

Paul Smith was the victor of the quad bikes, having a great run all week.  He lead the quad riders from Leg 2 and kept his lead for the remainder of the event. In the true spirit of Safari, Smith towed in his fellow quad competitor Colin Lawson for the last four or five kilometres of the stage.

Proof of the difficulty of Safari is the number of competitors who manage to reach it to the finish.

The event commenced with 112 vehicles on the Prologue Day and only 64 vehicles finished today, a 40 per cent attrition rate.

Check out the video