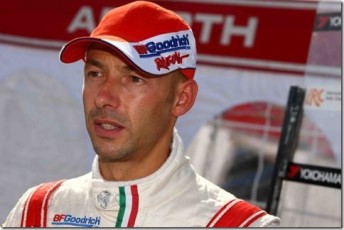 Giandomencio Basso has completed the opening day of Rallye Sanremo with a lead of 5.2 seconds in his Abarth Grande Punto Super 2000 after the battle for victory on the Intercontinental Rally Challenge (IRC) qualifier was turned on its head on the final 44-kilometre Ronde stage.

Basso started the monster test in fourth overall, 11.1s off the lead. But after going 15.5s faster than any of his rivals through the stage, which was held in drying conditions following earlier rain, the 37-year-old will hold the advantage heading into Saturday’s final five stages.

While Basso’s performance behind the wheel of the latest-specification Punto, which features a wider track suspension, was sensational, his decision to use a slick tyre, albeit with ‘cuts’ to provide added grip, clearly gave him the edge over erstwhile leader Paolo Andreucci.

The double Italian rally champion moved ahead of Kris Meeke on stage four thanks to his decision to opt for an intermediate tyre, which was less suited to the drying mountain roads overlooking the Mediterranean Sea.

Meeke, driving a Peugeot UK 207, had moved to the top of the leaderboard by going quickest on the day’s first stage. He was still leading after stage three but fell behind Andreucci after deciding to replace his front soft compound tyres with two hard compound versions.

IRC title leader Juho Hänninen started Friday’s final stage in third place following an impressive showing in his Škoda Motorsport Fabia S2000. Although he couldn’t hold on through Ronde after reporting his choice of intermediate tyres was too conservative for drying surface, he will begin day two with a sizeable margin over team-mate and title rival Jan Kopecký, who is a distant eighth overall.

It was a disappointing start to the event for Niall McShea, whose Proton Satria Neo S2000 ground to a halt on the road section heading to stage one with engine failure. However, team-mate Gilles Panizzi, a three-time winner in Sanremo, is 23rd on his first appearance for the Malaysian manufacturer.

Andreas Mikkelsen was another early casualty after he slid off the road seven kilometres into the first stage, where his M-Sport Ford Fiesta became stuck on a slope.