Lowndes in stunning form on the Safari

Lowndes in stunning form on the Safari 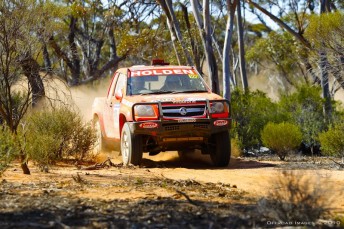 Leg Four of the Australasian Safari has been a day of getting down to business in the car division with the gaps widening at the top of the field.

Craig Lowndes and Kees Weel in a Holden Colorado stretched out a 19 minute lead in the Western Australian outback.

The V8 Supercar star started the day in first position after officials removed several minutes from his overall time after he had stopped to assist a fellow competitor who had crashed on the third leg.

Lowndes had also struggled with clutch issues, but with that rectified prior to Leg 4, the L&H Phillip Island 500 winner put his foot down.

A good day was had by Bruce Garland and Harry Suzuki in their Isuzu DMAX as they move up two places to third fastest in the auto field, 32 minutes behind the leaders.

Darren Green and Wayne Smith also had a strong run, now in the second fastest position, also moving two places up the field. 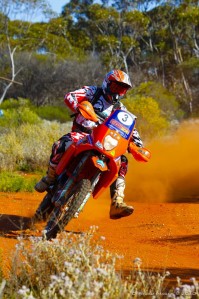 Father and son team Des and Richard Harrington are in fifth position.

It’s tighter in the motorcycle division, with the top four within 12 minutes of each other.

Last year’s winner Jacob Smith was the first bike out today from Coolgardie, but came into trouble in the second stage of the day, coming off his bike and requiring a helicopter transfer to Kalgoorlie Hospital with a suspected broken leg and injured shoulder.

The top international competitor is currently Swedish competitor Annie Seel currently in 16th position of a field of 40.

Classifications for Stage 10 in regards to the moto category are under review by the event organisers after a number of riders stopped to assist Jacob Smith after his fall.  This means that for now the start order for Leg 5 is based on the classifications at the end of Stage 9.

Considered one of the world’s great endurance events, the Australasian Safari is travelling from Southern Cross in the wheatbelt through to the historic Western Australian goldfields, desert, rugged bush and coastal sand dunes, finishing at Esperance.

Here is the video update

*Times DO NOT include the day’s final stage