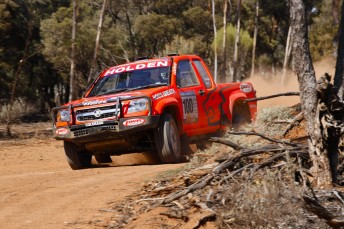 V8 Supercar star Craig Lowndes has survived the toughest day of his introduction to off road racing during Leg 5 of the Australasian Safari in Western Australia.

Lowndes clipped a stump with the rear of his V8 Holden Colorado while attempting to pass a motorcycle competitor in the morning’s first stage, damaging the ute’s rear suspension.

Despite the damage, the three-time V8 Supercar Champion was still quickest through the stage by a whopping 12 minutes and stretched his lead in the seven day, 3,600km event.

Lowndes and co-driver Kees Weel were again fastest through the stage despite blowing an exhaust gasket, giving them a lead of almost 45 minutes with just two days left in the gruelling event.

“We were trying to give the bike as much room as possible but I caught the rear on quite a substantial stump,” said Lowndes.

“It was pretty banged up but the team did a great job to get the Colorado as straight as possible during the service break and we got back out on the track.

“Then we blew an exhaust gasket and it was right under the pedal area, so that made it pretty hot on the feet, but we’ve survived another day.”

Safari veteran Bruce Garland and Harry Suzuki had an early challenge on their hands when a drive shaft snapped in the first stage and they were forced to make a repair on the run, but they managed to hang on to third fastest position.

“I just took the whole thing out and continued another 200km using 2WD,” Said Garland.

“We also had three punctures.

“But we were back by the second stage and will be coming out strong tomorrow.” 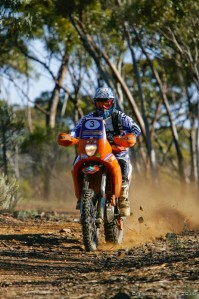 Ben Grabham remains in control in the bike segment

Bathurst motocycle rider Ben Grabham finished Leg 5 of the Australasian Safari without a hitch, finishing ten minutes ahead of the pack.

Others weren’t so fortunate, with third fastest Rod Faggotter skinning a tree, and Matt Fish, in fourth fastest position, going over the top of his bike in another action-packed day totalling 411 competitive kilometres.

“I enjoyed the stages today, but even though we’ve finished pretty early this afternoon, it seems like a long day,” said Grabham.

“The bike is going well so I’ll just hope for a trouble-free day tomorrow.”

In the quads, Colin Lawson has had a great first stage on his Can Am Renegade 500, travelling fastest in the first stage 49 minutes ahead of John Maragozidis and 58 minutes in front of Paul Smith.

However, electrical problems in the second stage of the day added time back on.  Smith is still in fastest overall position.

Tomorrow is the penultimate day of Safari 2010 and competitors will ride south to the beautiful coastal town of Esperance, with sand dunes likely to be prominent as the event moves closer to the Southern Ocean.

Here are the Video News highlights including Craig Lowndes interview