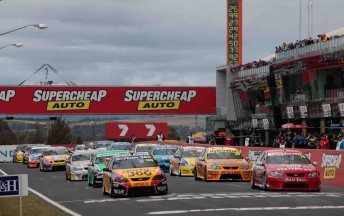 There will be a number of new and improved entries in the next round of the Fujitsu V8 Supercars Series at Bathurst.

Percat, currently third in the FV8 Series, has driven for Jay Motorsports for the first four rounds of the title, but will shift to the Eggleston car, with preparation assistance from Walkinshaw Racing – the team that Percat drove for in the L&H 500 at Phillip Island.

Percat will drive the #54 Bundaberg Red-backed Commodore VE that David Reynolds drove to a podium finish at the Townsville Fujitsu Series round in July. He will test the car this Monday at Winton. 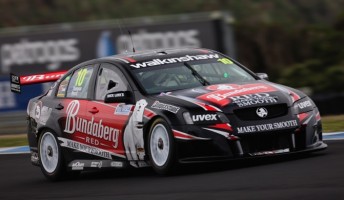 Percat is one of three Eggleston Motorsport entries at Bathurst, with team owner Ben Eggleston set to saddle up for his first race of the year, driving the JAX QuickFit Commodore, recently driven by Cameron McConville and Craig Baird at Winton and Townsville respectively. The third Eggleston car will be steered by Terry Wyhoon.

While Percat hopes that his new car will help him bridge the gap in to runaway leader Steve Owen and rookie Tim Blanchard, there will be a number of other new drivers in the Fujistu pack hoping to steal some of the leader’s thunder.

Another rookie driver in the field will be Australian Formula 3 contender Ben Barker. The Englishman, currently leading the local F3 title, will step up and make his tin-top debut after a number of tests in V8 Supercars.

Barker will drive for Matthew White Motorsport and team owner White thinks that he has what it takes to be a success in V8s.

“I think he’ll be impressive. Obviously it’s a hard track to make your debut, but from what I’ve seen of him in testing, he’s very fast,” White told Speedcafe.com.au.

“He’s a good kid, and has done a great job in Formula 3 this year. I’m really looking forward to working with him.”

Even though Barker’s start is just a one-off, White hopes that this can be the start of a longer association.

“At this stage, it’s just for Bathurst only,” he said.

“I’d like to think that he’s a long-term option for us. We want to work this into something bigger down the track, and that’s what this is about for us.”