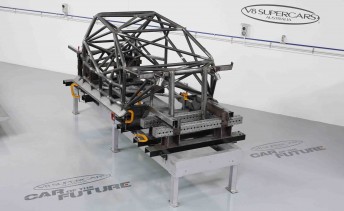 V8 Supercars has pulled the covers off its first-ever Car of the Future prototype today, outlining its debut date and testing schedule.

The Car of the Future prototype, the first built to future-V8 Supercar specifications, is currently under construction at PACE Innovations’ workshop in Queensland.

Two Car of the Future prototypes (Ford Falcon FG and Holden Commodore VE II) are due for completion by the end of 2010. They are tentatively scheduled to make their on-track debut at V8 Supercars’ season launch and official pre-season test at Eastern Creek on Saturday January 29 – the first stage of a rigorous 3000km testing program of the prototypes throughout 2011.

The Car of the Future will then be eligible in the 2012 V8 Supercar Championship Series before becoming compulsory in 2013 for all teams and potential manufacturers.

“The Car of the Future project is pivotal in the growth of the category and to guarantee V8 Supercars’ long-term success. Importantly, it also gives us a chance to underline the fact that these cars will be proper manufacturer race cars and not taken the NASCAR approach of undefined body shells.”

Ceprnich is in charge of the build of the two Car of the Future prototypes and says the construction process is going well.

“We have currently constructing the control floor and rollcage for the first car, the area which would be the same regardless of what manufacturer it will take,” said Mr Ceprnich.

“This includes the roll cage, chassis and non-OE (original equipment) elements of the car. We are currently 90 per cent finished building the common platform of the first car.

“We probably have another week to go to finish the common platform of the first car. We’ll then start to fit the OE panels which are manufacturer-specific.”

The Car of the Future initiative was announced by V8 Supercars Australia in March. The V8 Supercar evolution provides a common racecar structure (chassis, roll cage, etc) but importantly allows each competing manufacturer to develop the rest of the car to its own DNA. Therefore, all competing cars look like the road-going version of the manufacturer’s model.

As a consequence, the new formula maintains the look and style of the manufacturer, while providing a level playing field, driver safety and a cost-effective operation for the competing V8 Supercar teams.

The on-going construction of the first Car of the Future prototype can now be viewed on a live blog (www.v8supercars.com/cotf), which will continue to update as the build progresses – featuring images, designs, technical information and the behind-the-scenes information of the construction process.

Whitaker said that the best way to keep people up-to-date with the car’s build is to let them see it.

“This is such a unique project that we couldn’t keep it behind closed doors. Instead, with the blog, we are doing the opposite and taking the build process of these much-anticipated prototypes to the world,” he said.

“A lot of people are interested in this project, both in Australia and abroad, will get to see the development first-hand; alongside our own V8 Supercars teams.”