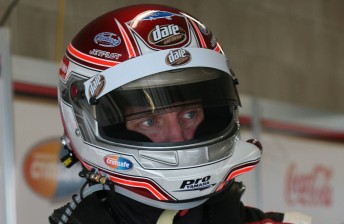 Jim Beam Racing has confirmed that Steve Johnson will remain with his part-family-owned team for the 2011 V8 Supercars Championship Season.

Amid paddock chat that the 36-year-old was shopping around for another drive for next year, Johnson has committed to ‘The Team,’ becoming one of the longest-standing ‘one-team’ drivers in the series.

Johnson’s move to re-sign now places all of the silly season emphasis onto Toll Holden Racing Team driver Will Davison.

Davison is at the end of a two-year deal with the factory Holden team and, according to his management, a decision on his future is yet to locked away.

Davison’s options appear to be narrowed down to two – with current employer Toll HRT or switch to rival factory squad Ford Performance Racing.

Davison will not make an official decision on his future until after the next two races at Bathurst and Gold Coast.

In the meantime, Johnson is pleased to lock in his future.

“It’s great that I’ve been in a position to control my own future,” said Johnson.

“But in the end, taking the option to extend for a further year was an easy decision for me.

“While we haven’t caught too many breaks on the track this season, the team is working really well and I’m still enjoying driving.

“I’m really happy that we’ve been able to come to this arrangement.”

Johnson first drove a V8 Supercar for Dick Johnson Racing at Oran Park in 1994. Since then, he has competed with the legendary Ford team at least once every year before joining them full-time in 2000.

Jim Beam Racing co-owner Charlie Schwerkolt said that he was pleased Johnson had chosen to stay alongside an unchanged line-up for 2011.

“Continuity and consistency are key for us,” said Schwerkolt.

“Steve is fast, reliable and a great addition to Jim Beam Racing.

“We are really happy to be moving forward with our current line-up of Steve and James (Courtney) and we couldn’t be happier with how things are traveling for us at the moment.”