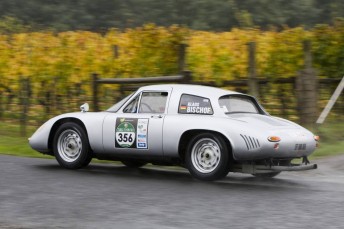 Le Mans will come to Historic Sandown on 5-7 November this year where the appearance of three special racing cars from the Porsche Museum in Stuttgart co-incides with the 40th anniversary of the marque’s first outright success in the 24-Hour sports car classic in 1970.

The three Museum cars, representing Porsche’s Le Mans participation from the early 1960s to the late 1990s, will be seen and heard on the 3.1km metropolitan Melbourne circuit as they take part in timed Regularity (average speed) events during the two-day annual ‘Return of the Thunder’ program.

The distinctive-looking Porsche 356B Carrera 2000 GS/GT, nicknamed ‘Dreikantschaber’ (‘three-pointed scraper’) because of its Butzi Porsche-designed wedge shape, competed at Le Mans in 1963.

Powered by a 1966cc, 208HP (155kW) development of the famous boxer four cam, four-cylinder engine fitted to the original Porsche 550 Spyder back in 1953, and weighing just 820kg, the ‘DKS’ achieved 225km/h on the Mulsanne Straight, but it retired with engine failure.

However it represents a glorious era for Porsche 356-based sports cars at Le Mans that began in 1951 when a 1.1 litre aluminium-bodied ‘Gmund Coupe’ averaged 140km/h to win its class. 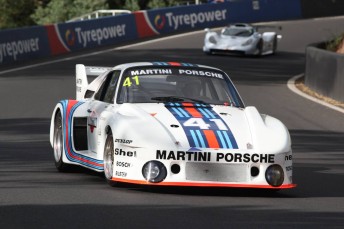 This golden era is represented by two dramatically different vehicles from the company’s Museum – the legendary 340km/h  Porsche 935 that won the World Constructors’ Championship in 1976 and 1977 and the first – and only – road-going ‘homologation’ version of the 1998 Le Mans-winning 911 GT1.

Powered by a turbocharged 2.8-litre boxer engine producing 434kW at 7,900rpm, the 935 appearing at Historic Sandown is the actual car campaigned in 1976 by Belgian Jacky Ickx and German ace Jochen Mass and has been fully-restored to its original race condition.

Other than minimal road equipment to allow it to be registered in Europe, the GT1 is identical to the car that won Le Mans in 1998 on Porsche’s 50th anniversary. It is powered by a twin turbocharged, 3.2-litre, six-cylinder boxer engine producing 400kW at 7,200 rpm and has a top speed of 350km/h.

Adding further excitement to the Porsches’ appearance at Historic Sandown, Porsche ‘Rolling Museum’ director Klaus Bischof will be flying to Melbourne specifically to demonstrate the cars.

“The 935 and GT1 are iconic Porsche racing cars and I know they will be appreciated by Porsche enthusiasts who visit Sandown.”

The three Le Mans Porsches are amongst an expected 400 touring, sports and racing cars spanning seven decades expected at this year’s Historic Sandown, which will be supported by Shannons and CoolDrive.

The 50th anniversary of the Australian Touring Car Championship, and 100 years of Alfa Romeo will also be celebrated at the meeting with major vehicle displays.