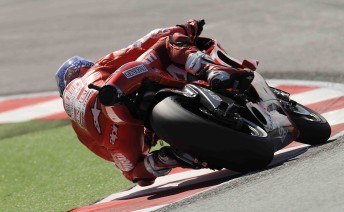 Casey Stone will start from pole position at the Aragón MotoGP.

After a difficult and winless season so far, Stoner will start the Grand Prix of Aragón ahead of Yamaha’s championship leader Jorge Lorenzo and Honda’s Dani Pedrosa.

Stoner’s pole position was his first since the opening round of the year at Qatar, becoming the first and only rider to get under the 1m49s mark on his Ducati Desmosedici GP10. His time was 1m48.942s on his penultimate lap of the session – clearly the best of any rider.

Lorenzo will start from the front row of the grid for the 15th successive race after maintaining his fantastic qualifying record, which stretches back to the Malaysia round last year. The Fiat Yamaha rider was 0.309s off Stoner with a best time of 1m49.251s.

In-form rider Pedrosa contended for pole and appeared to be en route to taking top spot when he went through the second split on his final lap 0.215s up on Stoner, but the Spaniard ran wide, eventually placing third.

Check out the video of qualifying