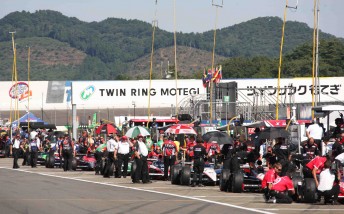 Penske has crushed its IZOD IndyCar opposition at Motegi, taking pole position for this weekend’s event at Twin Ring Motegi.

Brazilian team stalwart Helio Castroneves claimed the top spot for the Indy Japan 300, ahead of his to Australian team-mates Ryan Briscoe and IndyCar Series championship points leader Will Power.

Power will share Row 2 with his title rival Dario Franchitti.

Power, who scored his 12th-consecutive top-five starting position, says that he will shoot for victory in a bid to wrap up the title.

“I’m very happy about the (team’s) starting positions,” he said.

“We hope we can execute in the race and get some points back. We’ve had a pretty good lap time over the last couple of races. We’re going to ultimately look to win it.”

All of the top four drivers in Japan will compete in the Armor All Gold Coast 600 in V8 Supercars this October.

Speedcafe will bring you a full race report later this afternoon.

Check out the video with Castroneves after qualifying