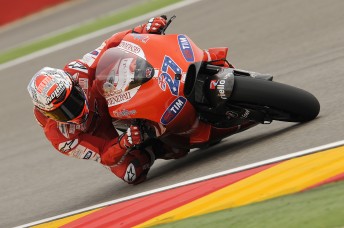 Casey Stoner has taken his first victory of the 2010 MotorGP season at Aragón, converting his pole position at the Spanish circuit into a well-deserved win.

The Ducati Team rider finished 5.148-seconds ahead of Dani Pedrosa (Repsol Honda), with team-mate Nicky Hayden completing the podium for his first top-three result of the year after a magnificent last-lap overtake on Jorge Lorenzo (Fiat Yamaha).

Starting from pole Stoner held his position going into the first turn, but usual rapid starter Pedrosa dropped to fifth as the riders bunched up in the tight opening curve. The Repsol Honda rider fought back in the early stages of the race however to climb to second behind Stoner, and the gap between the two fluctuated throughout.

The pair were consistently fast for the duration of the race but Stoner managed to pull away towards the end as he achieved what was eventually a comfortable 25 points, with Pedrosa maintaining his good form in second.

“We had the first race (this season at Qatar) wrapped up until I made a mistake.

“We’ve been struggling to get the bike on the pace this year, but this weekend we tried something totally different, and since then we’ve had a better feeling with  the front end.

“I had a slip up this morning, but we were able to pick up the pace when we needed to and get the win.”

Honda’s Pedrosa paid credit to the Ducati team: “Ducati were very strong, with both riders on the podium.

“I tried everything, I didn’t start well but I recovered,” he said of his battle with Casey.

“But I was too far from Casey. We did many laps at the same pace but couldn’t get him on corners. He did good.”

“Ducati were very strong, with both riders on the podium,” said Pedrosa.

“I tried everything, I didn’t start well but I recovered.

“But I was too far from Casey. We did many laps at the same pace but couldn’t get him on corners. He did good.”

There were battles all the way through the field and none more entertaining than that between Hayden and Championship leader Lorenzo for the final podium spot. A fearless overtake on Lorenzo by Hayden on the final lap delivered the American the honours, and ended the Fiat Yamaha rider’s record of having placed on the rostrum at every race so far this season.

“I didn’t mean to leave it that late,” said Hayden.

“In the final laps, Jorge kept the doors shut.

“It’s been a very good weekend for us.”

Ben Spies (Monster Yamaha Tech 3) notched another impressive result with fifth place as he resisted the challenge of Andrea Dovizioso (Repsol Honda), who crashed out on the final lap whilst pushing hard in their contest.

Lorenzo’s advantage at the top of the Championship was cut to 56 points and he now stands on 284 points, with Pedrosa on 228 in second. Stoner’s victory lifts him to third from fifth on 155, with Rossi staying fourth and Dovizioso dropping to fifth.

MotoGP heads to Japan on 3 October at Twin-Ring Motegi.

MotoGP Standings after Race 13 of 18