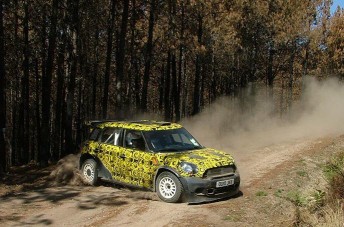 Kris Meeke took the wheel of the Mini WRC

Intercontinental Rally Challenge (IRC) Champion Kris Meeke has taken the wheel of the Mini Countryman World Rally Car during the latest round of testing with Prodrive at Ponte de Lima, Portugal.

Although not officially confirmed, the Ulsterman is expected to be part of the driver line-up during Mini’s during its selected outings in the World Rally Championship in 2011 – before a full programme in 2012.

Earlier in the week former Ford and Peugeot works driver Markko Martin took the wheel of the Mini. Two-time World Rally Champion (2000 & ’02) Marcus Grönholm is also set to drive the Countryman during this test period in Portugal.

The new Countryman only completed its shakedown phase at Prodrive’s private proving ground in Warwickshire (UK) during the week prior to heading to Portugal. That shakedown was carried out by Mads Ostberg and Terry Kaby.