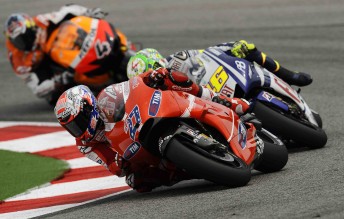 Casey Stoner on the pace during practice at Aragon

The Ducati star was quickest ahead of championship leader Jorge Lorenzo and team-mate Nicky Hayden as the riders were reduced to a snail’s pace due to the weather.

The wet conditions meant that Honda’s Dani Pedrosa remained the day’s fastest rider after the dry morning run. Hayden and Lorenzo were second and third respectively in the dry, followed by Stoner, Marco Simoncelli (Honda) and Valentono Rossi (Yamaha).

It was a good day for both Stoner and Pedrosa. While Stoner proved fast in the wet, Pedrosa was fastest overall, plus he earlier announced that he would stay with Honda for the next two years. He will be joined by Stoner next year.

After being fourth in the dry morning session, Stoner went round in a best time of 2m01.710s on his final lap in the afternoon practice as the MotoGP field continued to adapt to the new circuit.

While Pedrosa’s dry form was good, he was down in 13th place in the wet.

The third and final practice session will be followed by qualifying for the Gran Premio A-Style de Aragón.