Battle of the rising stars at World Title

Battle of the rising stars at World Title 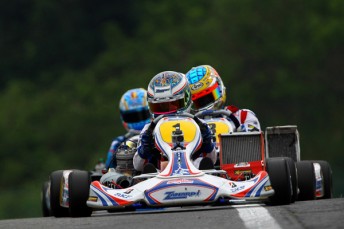 Nyck de Vries will start as one of the favourites for this weekend's World Championships. Pic: FFF-CIK

The 47th running of the CIK-FIA World Karting Championship Zuera, Spain this weekend is gearing up to be a battle for the Formula One Development drivers.

Of the 125 drivers lining up for the event, the largest number since 1993, particular interest will focus on the drivers from the McLaren Young Driver Development program, Nyck de Vries and Oliver Rowland, and those of the Ferrari Driver Academy, Raffaele Marciello and Brandon Maisano.

De Vries will enter the event as the favourite having taking out the European Junior Championship last year in the 1700m Zuera circuit.  Over the past two years he has also captured back-to-back World Series Karting and German Titles in the KF3 category.

Since making the move into the senior ranks at the start of this year, the diminutive 15 year-old prodigy has overshadowed all the big names and recognised talents of karting in all the international non-championship competitions he has entered.

The entry list long and rich in talent with the likes of European KF2 Champion Moller Madsen, Portuguese’s David Da Luz (who won the 2009 World Cup for KF2) along with the Finn Teemu Suninen, the Japanese Yu Kanamaru, the Italians Matteo Vigano and Ignazio D’Agosto.  Australian Mitchell Gilbert, who has spent the majority of his life living between Malaysia and Italy, will also be lining up this weekend.

Three Scandinavian female drivers will line up on the grid – Dane Michelle Gatting, who finished third in the Asia-Pacific KF2 Championship last May in Japan, Norwegian Ayla Agren and Finn Laura Koivuluoma.

Each competition day in Zuera will correspond to a major stage of the World Championships with qualifying practice being held on Friday.  On Saturday, after the 12 qualifying heats, 34 finalists will be known. And on Sunday the result of the morning pre-final will finalise the starting grid of the big final scheduled for noon (local time).

Eurosport will be broadcasting the action live from Zuera with Australian viewers able to watch the action through Eurosport’s International feed from 7:45pm AEST on Sunday night.