McConville likely to race in all remaining events

McConville likely to race in all remaining events 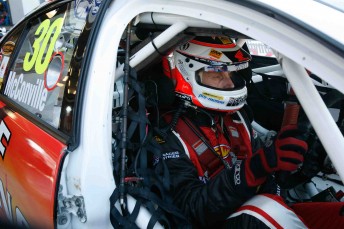 Cameron McConville is likely to compete in all of the remaining events of this year’s V8 Supercars Championship Series.

The Toll Holden Racing Team endurance driver, who finished ninth in yesterday’s L&H 500 at Phillip Island with Garth Tander, will compete with the factory Holden squad at Bathurst and the Gold Coast before being slotted back into Lucas Dumbrell Motorsport’s Gulf Western Oils Commodore VE II.

McConville drove the LDM entry at the Sucrogen Townsville 400 in July, replacing New Zealander Daniel Gaunt who started the season with the new team before being ousted.

Dumbrell, the youngest-ever V8 Supercars team owner, told Speedcafe.com.au that the “most likely” outcome would be McConville driving the #30 Commodore at Symmons Plains, Sandown and the Sydney Telstra 500. 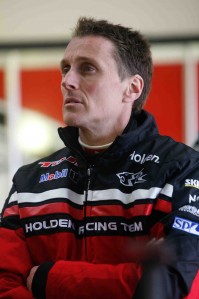 “We don’t want to be swapping drivers too much, but we’ve been dealt the hand we have after we released Daniel,” he said.

“I most likely think we’ll keep Cameron. He’s driven the car at Townsville, and he won’t be doing anything post-Gold Coast, so I’d say most likely McConville.”

The Gulf Western Oils car is built by Walkinshaw Racing, and his team also receive technical assistance from them. Dumbrell says that this is the biggest advantage of entering McConville in that all of his recent V8 experience is with WR equipment.

“Cam has run Walkinshaw Racing gear up until last year, and he’ll be pretty fresh in that gear in these three races that he’s got now,” he said.

“At Tassie, Sandown and Homebush, out of all the drivers available, he is probably one of the best who has driven at those tracks in recent years.”

While McConville will be busy driving the #2 Toll HRT Commodore with Tander, Dumbrell is yet to make up his mind on who will partner international driver Scott Pruett at the new Armor All Gold Coast 600 in October.

He says that either of his endurance drivers, Mark Noske and Nathan Pretty (finished 24th at Phillip Island yesterday) will drive on the Gold Coast.

“We’ve got two approaches for the Gold Coast – we’ll use either Mark or Nathan,” he said.

“It doesn’t really matter because they’re both doing the same pace. They were on par at Phillip Island.”