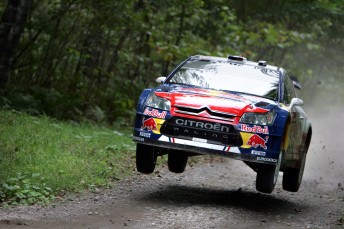 The 26-year-old from France started the final day 5.4 seconds adrift of overnight leader Petter Solberg in third place but moved to the front soon after the start of the day.

With Solberg’s privately-run Citroen C4 WRC hampered by a suspected broken damper and second-placed driver Mikko Hirvonen’s Ford Focus suffering a differential pump failure, Ogier faced little resistance as he stormed to victory on the 10th round of the season in his factory C4.

“Arriving here for my first time I knew it was a difficult rally because I don’t like stages that are very rough. But quickly I found a good feeling and a good rhythm.”

Despite reporting a serious steering problem on top of the damper issue, Solberg managed to soldier to the finish in second place.

“I never thought it would go so well after the fever because I was terrible at the start of the rally,” said Solberg.

“But I had a very good feeling. It’s just unfortunate we had a problem with the car.”

A hamstrung Hirvonen, a double winner in Japan, was less fortunate, however, as he grappled with a troublesome gearchange and was unable to prevent Sebastien Loeb from demoting him to sixth.

Loeb was off song throughout the event but his capture of 10 points for finishing fifth puts him on the brink of his seventh world title, which he can secure with victory on his home event, Rallye de France, which takes place from September 30 – October 3. He rounded off Rally Japan by winning three of Sunday’s six gravel stages.

Citroen Junior Team driver Dani Sordo took third on stage 20 but his hopes of a podium finish evaporated when Ford’s Jari-Matti Latvala swept in front on the repeat of the Naekawa stage.

Sordo, who started Sunday 15.3s off first place and with an outside chance of winning, was unable to explain his loss of time through the slower sections of the test and was furious at the end of the run.

“I don’t understand because I lose time in the slow parts but I drive clean and try everything,” said the Spaniard.

WRC Drivers standings after 10 of 13 rounds

WRC  Manufacturers standings after 10 of 13 rounds