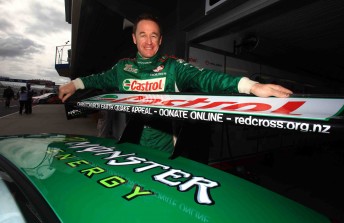 Murph’s #51 Castrol EDGE Holden Commodore will run signage on its rear wing and on the dashboard during today’s L&H Phillip Island 500 – well within sight of the car’s in-car cameras.

The website (redcross.org.nz) has details on how to donate on the appeal.

“When the community has been affected like it has in Christchurch with the earthquake, Kiwis shine,” Murphy said.

“We dig deep to help those who need it most and I hope we can help raise awareness to the appeal and lend a helping hand.”

Murphy has returned to racing just weeks after back surgery for the first of the endurance races in the V8 Supercars Championship Series.

Along with co-driver Tim Blanchard, the pair will start today’s 500km race from 22nd position.