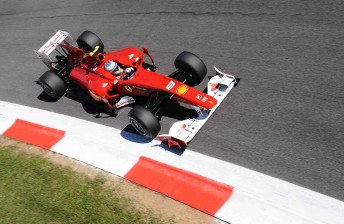 Fernando Alonso will start from pole at Monza

Fernando Alonso has taken pole for the Italian Grand Prix at Monza, giving the tifosi exactly what they came for at Ferrari’s home race.

Alonso set the standard in Q2, and went faster again in Q3, clocking a 1m21.962s on his first run in the final session.

Button opted to run his McLaren MP4-25 in high-dowforce trim, and was rewarded with second.

Alonso’s Ferrari team-mate Felipe Massa made it a strong day for the local team, finishing third ahead of Webber, Hamilton and Sebastian Vettel, who was less than impressed with his sixth place start.

Webber said that given the circumstances, he was happy with fourth place.

“I was pretty happy with qualifying,” he said.

“It’s tight round here and trying to get it all together is not the easiest. When you’re pushing hard on the chicanes it’s easy to over cook them. The guys did a good job.

“We were up and down with the wing levels, but everyone’s in the same position trying to get the car set up in the best way for Monza. It didn’t help that we got the car back quite late after we stopped out on track in P3, but we stayed cool. I didn’t get many laps on the option tyre, but the engineers were able to look at what Sebastian found out on them and the team worked closely to give me some information, which helped me.

“The Ferraris are flying today – it should be a good race.”

For Australian viewers, ONE HD will broadcast the race, with a pre-race show at 9.00pm, leading into the race at 9.50pm.