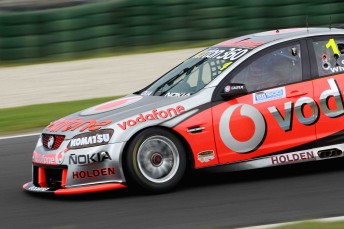 Jamie Whincup and Steve Owen will start from pole

Rick Kelly has crossed the line first in the second Qualifying Race at Phillip Island today – but it will be Jamie Whincup and Steve Owen who will start from pole for tomorrow’s L&H 500.

It was a dominant day for the #1 TeamVodafone Commodore, with co-driver Owen setting the fastest lap of the qualifying session, winning his qualifying race and Whincup avoiding some late-race madness to secure the top spot.

“Steve did an unbelieve job in the first one,” Whincup said.

“I got the worst start of my life and was battling with some of the ‘co-drivers.’ We’ve got a quick car, and I’m a bit slower than Steve, so I feel like the B-driver.”

Jack Daniel’s Racing’s Kelly, who will be partnered by namesake Owen Kelly, took the lead at the start of the race and held off a late challenge from Craig Lowndes to secure the win and a front-row start alongside the #1 car.

The second qualifying race was a relatively tame affair, with just one Safety Car period caused by Geoff Emery in the Greg Murphy Racing ‘Wildcard’ entry.