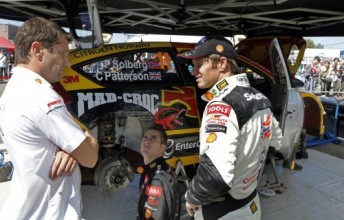 Petter Solberg in front in Japan

Petter Solberg has completed the opening day of Rally Japan with a lead of almost 10 seconds in his privately-run Citroen C4 WRC.

While that might not represent a huge advantage, Solberg has battled a fever throughout the day, which he admits has masked some of his pace.

“It has not been easy at all today,” said Solberg.

“I am feeling a lot better than I was but it’s very strange when you don’t feel okay and don’t have the energy you need. Now I need a good night’s sleep to sweat out the last bit [of fever].

“The car is working very well and we have had a good pace and a good performance today so I am happy. I know there is more to come from me.”

Mikko Hirvonen completed the opening loop of three stages today in fourth overall but an upturn in pace in the afternoon has enabled the factory Ford Focus driver to leap to second, 9.4-seconds behind the Norwegian, courtesy of two stage wins.

“I didn’t want to go too fast too early so I’ve been building up my speed slowly and it’s starting to be pretty good. We have to see what we can do tomorrow.

“I didn’t change anything at midday service; I just went for it because the others were doing that too.”

Sebastien Ogier is third on his first Rally Japan. He is also the leading works Citroen driver after team-mate and title leader Sebastien Loeb lost significant ground cleaning the road of the loose surface gravel on Friday morning.

“To be racing to be in the lead is very good for my first visit to Japan,” said Ogier.

“The road has been very bad this afternoon so it has not been easy. For this reason I am very happy. The car has been perfect but we made some changes to the set-up to adapt it for the rougher stages in the afternoon.”

Loeb, meanwhile, suffered a broken front damper to add to the delay he suffered running first on the road. His road position remained a hindrance for the afternoon tests due to the ruts that had formed following the first pass of the three gravel stages.

Dani Sordo completes the top five in his Citroen Junior Team C4 but was left to bemoan a gearbox glitch that struck during the afternoon.