Greg Murphy to drive in practice at Island

Greg Murphy to drive in practice at Island 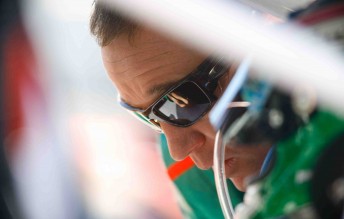 The New Zealander will climb behind the wheel of the #51 Castrol entry before making a decision on whether he will be fit to race.

Murphy is still recovering from back surgery just two weeks ago for an injury he sustained when on holiday in Fiji with his family during the nine-week V8 mid-season break.

If Murphy is unable to contest the Island 500, countryman Daniel Gaunt is on stand-by. Whoever drives the car, they will partner young V8 rookie Tim Blanchard.

Murphy, a four-time Bathurst winner, says his recovery has gone better than expected, but rates himself an 80/20 chance of making the race.

“I am definitely going to jump into the Castrol Edge Commodore Friday for some laps, but I can’t guarantee I’ll be racing,” Murphy said.

“My back is heaps better, but until I get into the car and do some laps I won’t know if I will have repeatability of braking effort.

“My doctor said that I need to judge things myself based on the pain factor. The back’s fixed, but the wound from surgery is also still healing. At this stage I’d say it was 80/20 – that’s not definite, but it’s better than the 50/50 chance of a week ago.”

If Murphy does rule himself out, 23-year-old debutant Blanchard will move into main driver role while Gaunt will step in to partner him.

Blanchard, currently second in the Fujitsu V8 Supercar Series, is hoping that Murphy is fit to race.

“I really hope Murph can race, I’ve been looking forward to driving with him, he’s a great driver with a lot of experience to learn from and advice to offer,” Blanchard said.

“If he can’t race my instructions don’t change, I’ll just have to do more laps. Paul [team owner Paul Morris] has told me just to keep up a reasonable pace, stay on the lead lap and don’t scratch the car.

“There’s no expectation on me to win, so if we can achieve our goal we should be in the top 15 as a minimum, possibly top 10.”

Practice for the L&H 500 Phillip Island kicks off at the Phillip Island Grand Prix circuit this Friday with two individual qualifying and two qualifying races for each car’s drivers to follow on Saturday – the combined results of Saturday’s races determining the starting grid for Sunday’s L&H 500.