Richards to compete at Goodwood Revival

Richards to compete at Goodwood Revival 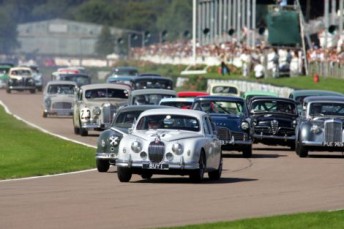 Jim Richards has been honoured by the Earl of March with an invitation to compete at the world renowned Goodwood Revival.

Some of the cars in the St Mary’s Trophy will be Austin A35s, Jaguar Mk VIIs and Morris Minors.

Richards is not the first Australian to race at the Goodwood Revival. In 2006, the late Peter Brock entered, just a week before he was killed in a rally accident in Western Australia.

Richards said that he jumped at the invitation from the Lord March to compete.

“I got a letter from Lord March, and I’ve responded saying I’d love to do it, of course!” he told Speedcafe.com.au.

“I’m also playing in the annual cricket match. So I’m playing cricket on Thursday, drivers briefing on Thursday night and racing after that.”

The St Mary’s Trophy is a two-part race, with celebrity drivers taking the wheel on Saturday, followed by the owner-drivers on Sunday, and the result declared on aggregate.

Each year, around 360 cars and motorcycles compete in 16 different races. Entry is by invitation only from the Earl of March.