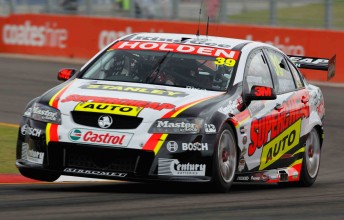 It’s the second-last day of the Castrol EDGE Endurance Countdown, but by no means an entry that should be forgotten.

The #39 Holden of Ingall and Morris could be labeled the ‘fighters’ of the V8 field – two drivers who won’t display the fastest outright pace, but if they’re in a position where they need to roll up their sleeves and get physically, don’t stand in their way!

As per normal Ingall-form, he has not been fast in qualifying this year, but again, true to form, he’s made up plenty of places during the races.

Morris has stayed in tune with some Fujitsu V8 Series racing, plus any other form of car he can get him bum in.

You probably shouldn’t bet your house on the Ingall/Morris car, but a sneaky few bucks might make things fun …