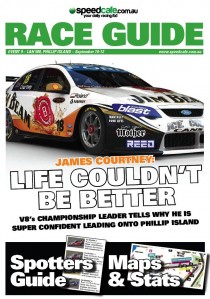 The Race Guide for this weekend’s L&H 500 at Phillip Island is available now – free for viewers of Speedcafe.com.au.

It is that time of year – V8’s Season of Endurance. Just like the footy finals, this is the time for the stars to shine, and to kick it off, Phillip Island hosts the first two-driver race.

Compared to the Bathurst 1000, the Island enduro is like the AFL’s pre-season NAB Cup, but regardless, it holds the same amount of championship points. And after a nine-week break, it will be ‘Game on.’

In this edition of Speedcafe’s Race Guide, championship leader James Courtney speaks about the value of the co-driver in this year’s races, and how he is very confident of keeping his number one ranking. And check out the new splash of paint on the side of his Jim Beam Racing Falcon FG …

Also, check out the V8 Fact Facts – some very interesting statistics and scenarios that will play out this weekend at Phillip Island.