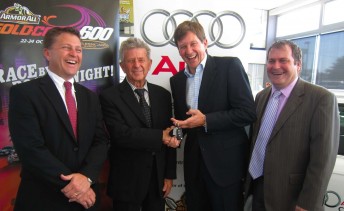 Expect to see a lot more Audis on the streets of the Gold Coast this October.

The Audi Centre Gold Coast, a part of the James Frizelle Automotive Group, will be the official vehicle supplier of this year’s Armor All Gold Coast 600, to be held on the streets of Surfers Paradise from October 22-24.

The Frizelle Group will also work with event organisers for the involvement of several of their growing list of celebrity ambassadors over the event including former Queensland State of Origin Star Gorden Tallis, Scott Prince and Mat Rogers.

The Frizelle Group was established in 1985 and now employs more than 300 people in its four locations and is extremely active in the Gold Coast community.

“The Armor All Gold Coast 600 has been such an important part of Australia’s event calendar for so long and it is only going to go from strength to strength in its revised format,” said Brett Frizelle.

“As a Gold Coast company we are delighted for Audi Centre Gold Coast to be the official vehicle supplier of the event and be a part of something very special.

“The Gold Coast 600, the Gold Coast Titans and Audi has first class products and we could not be happier being the “glue” that brings them all together.

“We have an exciting few weeks ahead with the Titans attacking the NRL finals and then the build up to the Gold Coast 600. In January 2011 we will then open our brand new state-of-the-art Audi Terminal in High Street, Southport.

“I think seeing 18 of the world’s best drivers, mixed with Australia’s own V8 Supercar stars in the back of 35 A5 cabriolets on the parade lap around one of the world’s most spectacular streets circuits is going to be a proud moment for everyone involved.”

As part of the deal, Audi Centre Gold Coast will provide a sensational R8 Spyder course car and RS5 safety car for the support categories at this year’s event as well as two official event vehicles and four yet to be released Audi A8’s for VIP transfers.

There will also be 35 sleek A5 cabriolets for the official driver parade before Sunday’s final 300km race.

On top of that, Audi Centre Gold Coast will be the presentation partner of the “A touch of Pink Luncheon” at Palazzo Versace on Friday October 22.

Queensland Minister for Sport, Phil Reeves, said October is going to be a sporting bonanza for the Gold Coast.

“October will hopefully start with a win for the Titans in the NRL Grand Final and finish with the high-octane Armor All Gold Coast 600,” Reeves said.

“I think it is fantastic that we have a successful Queensland-based company like James Frizelle’s Automotive Group recognising the importance of the new-look Armor All Gold Coast 600 and what it’s contribution is to this State and the rest of Australia.

“Through Audi Centre Gold Coast, the Frizelle Group has a record of backing local winners and that is evident through their support of the Titans who we wish all the best in the NRL finals and it’s great to have their involvement today.”

“This is the type of partnership that will fast track the Armor All Gold Coast 600 in becoming one of the world’s greatest motorsport events,” said Whitaker.

“It involves the enthusiasm and support of one of the region’s most respected businesses being Frizelle’s Automotive Group, integrates one of the world’s most recognisable and aspirational brands in Audi and provides a terrific tie with the Gold Coast Titans who the event already has a great working relationship.”

The Armor All Gold Coast 600 will take place on the streets of the Gold Coast from Friday October 22 to Sunday October 24, with less than 50 days now remaining until Queensland’s premier motorsport event comes to life.

The event will feature 18 international drivers alongside the V8 Supercar stars by day, and 16 International and Australian acts by night, in a continuance of V8 Supercars’ highly successful Rock ‘n’ Race format.