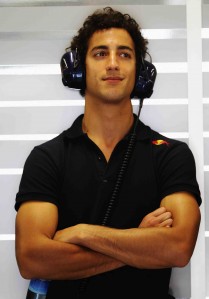 Australian Daniel Ricciardo endured a difficult day in Hockenheim following a drive-through penalty in Round 13 of the Formula Renault 3.5 Championship.

The Red Bull Junior lost a potential fourth place when he was penalized for speeding in pitlane. He eventually crossed the line 12th – only the third time this season that Daniel has finished outside the top 10. He remains second in the title chase, seven points behind Mikhail Aleshin.

After dominating proceedings the day before, Sunday’s events were far more difficult.

Qualifying this morning was a mixed affair, with Daniel and his team mate Jean-Eric Vergne qualifying 10th and 14th respectively, but Daniel’s main championship rival Mikhail Aleshin was only a few places ahead of him in seventh place.

Ricciardo made a lightning start, passing several drivers and fighting wheel to wheel with Aleshin through the first few corners. At the end of the first lap, Daniel was already up to fifth place …
As the race entered a steady rhythm, Ricciardo continued to put championship rival Aleshin under pressure, and was just 0.8 seconds behind on lap six, but the pit stop speeding penalty cancelled any chance of picking up more points on him.

“We can’t change the result now but I don’t understand how I could have been speeding in the pit lane during the race as I was so careful. It’s a very frustrating way to end a weekend which started off so well for us. Without the penalty we would have been looking at a podium finish.

“Now I need to focus on the next race at Silverstone which has been a very strong track for me in the past.”

Ricciardo will return to the track for the penultimate round of the Formula Renault 3.5 championship in two weeks time at Silverstone.