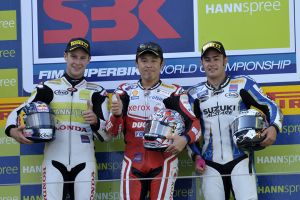 Jonathan Rea (Hannspree Ten Kate Honda) and Noriyuki Haga (Ducati Xerox) each got back to winning ways at the Nurburgring round of the World Superbike Championship.

Rea posted his fourth and Haga his second win of the 2010 championship campaign. It was a frustrating weekend for the two top riders as they had to watch others take the glory. Max Biaggi (Aprilia Alitalia) had his championship lead over Leon Haslam (Suzuki Alstare) cut, despite Haslam suffering a dislocated thumb and knee injuries. Biaggi now leads the series by a slightly trimmed 58 points, with two full rounds to go.

Rea’s win and then a second place, combined with a luckless race two for Carlos Checa (Althea Racing) sees the Honda man in third overall, 64 points ahead of the Spanish rider. MotoGP-bound Cal Crutchlow (click here to read story) is only seven points behind Checa, in fifth place, having scored a third and a fourth place in Germany. Haga’s win sees him sixth, 15 points clear of James Toseland (Yamaha Sterilgarda) who fell in race one and was only eighth in race two. Strong rides from Sylvain Guintoli (Suzuki Alstare) put him eighth overall, ahead of injured rider Leon Camier and Michel Fabrizio.

Jonathan Rea took an early lead in the re-started first race, and rode at full pace to lead Carlos Checa home and record his fourth win of the 2010 season. Third place went to Yamaha Sterilgarda rider Cal Crutchlow, ten seconds back on Rea. Championship leader Max Biaggi was fourth, and Kawasaki Racing Team rider Tom Sykes was a more than creditable fifth. Leon Haslam, one of the riders involved in the crash that caused the race to be stopped and then completely re-run, was sixth. Ruben Xaus was first BMW Motorrad Motorsport rider home in Germany, seventh.

“A great race and a great weekend for the team,” said Rae.

“Already on Friday we were right on the pace, we came out with a bike that was good, really pushed hard, I felt comfortable on it and turned it into a good result so I’m really proud of my team.”

Noriyuki Haga, a race one faller, was an impressive winner of race two, the Japanese rider shining strongly in the German sunshine. He was an eventual 3.061 seconds ahead of Jonathan Rea. Leon Haslam (Suzuki Alstare) rode through the pain barrier to go third, with Cal Crutchlow (Yamaha Sterilgarda) ending up fourth. Max Biaggi (Aprilia Alitalia) managed to keep Sylvain Guintoli (Suzuki Alstare) behind him at the flag for fifth, in a tense 20-lap race for the championship’s top men.

“I’m very happy with this result and very sorry for the first race,” said Haga.

“When I had a crash, I wasn’t getting information from the front tyre and for race 2 I made just a little modification for the front suspension and that was working much better.

“I was able to keep a high pace until the flag. Next round is Imola, our home track and I have much pressure but I hope to do my best.”