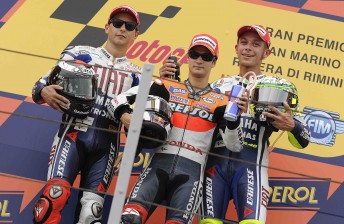 Pedrosa took his fourth win of the season, finishing first ahead of Championship leader and rival Jorge Lorenzo and home-town favourite Valentino Rossi.

Pedrosa set a stunning pace from the start and was almost 1.5s clear of Lorenzo by only the third lap, as he set a lap record early on in the 28-lap contest.

While Pedrosa pulled away and Lorenzo riding a lone race in second position, the real battle was for the final podium spot. Rossi and Casey Stoner fought a great battle with the pair swapped positions a couple of times before the Italian made a move stick. Andrea Dovizioso also passed the Australian shortly after.

Rossi and Dovizioso pulled away as they contended for the honour of highest placing Italian rider, and it was a battle the reigning World Champion eventually won comfortably.

At the end of the race, Pedrosa crossed the finish line 1.9s clear of Lorenzo, with Rossi just over a second behind his Fiat Yamaha team-mate.

Lorenzo’s lead at the top of the standings is now 63 points over Pedrosa, with Rossi moving into fourth overall, nine points behind Dovizioso.

Melandri’s team-mate Marco Simoncelli crashed but rejoined the race to finish 14th, while Mika Kallio (Pramac Racing) was forced to retire late on.

There were also two early fallers. At turn one, Loris Capirossi (Rizla Suzuki) and Nicky Hayden (Ducati Team) went down together. The American rejoined the race but later had to retire with the Italian suffering the disappointment of a DNF on his 200th premier class start.