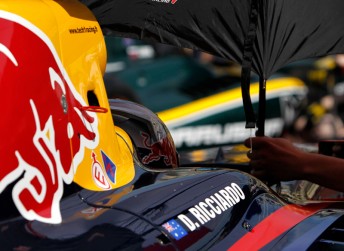 Australian Formula One hopeful Daniel Ricciardo has taken his sixth Formula Renault 3.5 pole position of the season after a stunning performance at the Hockenheim circuit in Germany today.

The 21 year-old West Australian racer will start this afternoon’s race (German time) just ahead of his main championship rival Mikhail Aleshin who will line up third on the grid.

Conditions were dry for qualifying, and after being fastest in Friday practice, Ricciardo confirmed his pace by taking provisional pole with 10 minutes of the session gone.

A small fear crept into the Ricciardo camp when he slipped to second place and a red flag was brought out for a separate incident, just as he’d gone out for a second new tyre run.

But with only a few minutes left on the clock, Ricciardo returned to the track for his final attempt, securing pole in the final minute.

“This is a good way to get back into racing after such a long break,” he said.

“I’m really happy with our performance so far this weekend and the car; now we need to translate this into a race win.”