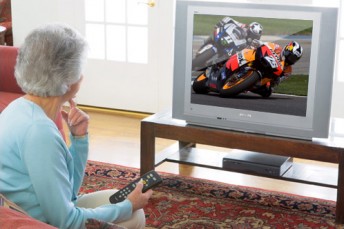 MotoGP is back on the box this weekend

It’s ‘on your bike’ as MotoGP and World Superbikes headline the LIVE TV motorsport action this weekend.

Just a week after racing at Indianapolis in the USA, the MotoGO circus is back in Italy at Misano for the San Marino Grand Prix. Qualifying can be seen on ONE HD on Saturday night. The LIVE race action gets underway with 125cc from 6.45pm on Sunday evening. Moto2 is LIVE from 8pm and MotoGP is LIVE on ONE HD from 9.30pm.

The World Superbikes from the Nurburgring is LIVE Sunday evening on Foxsports from 7.30pm.

NASCAR stops-in at Atlanta. LIVE Nationwide race coverage can be seen on ONE HD from 8.30am Sunday morning. While the Sprint Cup race can be seen LIVE on Foxsports from 9.30am Monday morning.

After heartbreak for Will Power last weekend at Chicagoland Speedway, the Toowoomba driver can hit back straight away at the Kentucky Indy 300. Catch LIVE race action on ESPN from 10am Sunday morning.

The NHRA US Nationals also known as the ‘Big Go’ can be seen on ESPN with qualifying on Sunday and final eliminations from 3am Monday morning.

Eurosport has plenty of LIVE motorsport with the World Touring Car Championship from Oschersleben. Check out qualifying on Saturday night, then on Sunday is LIVE warm-up and race coverage. On the same bill is the FIA Formula 2 Championship, European Touring Car Cup and SEAT Trophy. Over at Hockenheim is the World Series by Renault, which includes Perth’s Daniel Ricciacardo; that can be seen LIVE on Saturday evening at 10pm.

Neil Crompton and Mark Larkham head to the Holden Racing Team this Saturday on Seven at midday for a special workshop episode with a LIVE audience. Garth Tander and Will Davison look at the season so far and what’s ahead including the L&H 500 at Phillip Island.