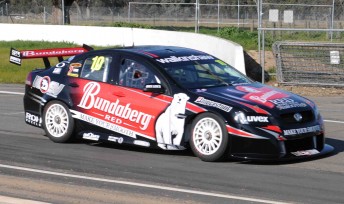 Bundaberg Red Racing has confirmed its driver pairings for this year’s L&H 500 at Phillip Island, with rookie Nick Percat securing his ride alongside Andrew Thompson.

The team also revealed its new look that it will carry into the second half of the season.

At this stage, the announcement only covers the Phillip Island race. It is expected that Australian international star Ryan Briscoe will join the Walkinshaw Racing crew for the Supercheap Auto Bathurst 1000 (October 7-10), which is likely to leave Percat to concentrate on his Fujitsu V8 Series commitments.

Percat, 21, currently third in the Fujitsu Series, is thrilled to be partnering Thompson in the Phillip Island enduro in a couple of weeks time.

“This is a fantastic break for me and I am grateful to Walkinshaw Racing for the opportunity,” Percat said.

“I have been fortunate enough to have had a solid relationship with Walkinshaw Racing since 2007 and to get the call up for Phillip Island is an honour.

“I sat down with (WR CEO) Craig Wilson and discussed my options for this year and partnering with Andrew Thompson was an opportunity I had hoped would become a reality.

“We are only a very young combination and we are competing against guys with a lot more experience but I think we have the potential to put together a strong result.”

In the #24 Bundy Red car, Fabian Coulthard will be joined by fellow New Zealander Craig Baird.

After a thus-far disappointing season, Coulthard is keen to start fresh.

“To be joined by someone with Craig’s experience in this sport is a massive boost for the Bundy Red Racing Team” Coulthard said.

“Craig is a great bloke who has been within the Walkinshaw Racing squad for a number of years now so he should settle in quite comfortably.

“We are of similar size, height, stature and ability, he knows these cars well so I am getting itchy feet now to just get out there and get the job done.”

Baird has driven for the Toll Holden Racing Team for the past two seasons and this year shifts across to the organisation’s sister team. Having competed against Coulthard in various motorsport categories, this will be the first time the pair have driven together.

“I’m excited about teaming up with Fabian in the #24 Bundy Red Racing Commodore,” Baird said.

“I had the chance to get a few more miles under my belt at the Townsville event last month which has left me feeling confident heading into the L&H 500.”

The new-look Bundy Red Racing Commodores are all participating in a test day at Winton Motor Raceway today before the Phillip Island event (September 10-12).