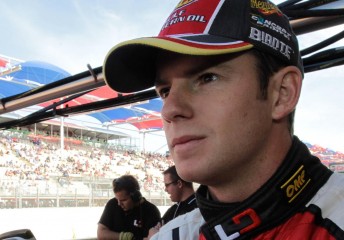 Daniel Gaunt is likely to take Kiwi compatriot Greg Murphy’s place in the #51 Castrol EDGE Commodore at next week’s L&H 500 at Phillip Island.

Gaunt, who drove for Gulf Western Oils Racing for the first half of the season before being dropped from the seat, is testing the Murphy car while the four-time Bathurst 1000 rests his back which he recently injured.

While Murphy hasn’t been totally ruled out driving at Phillip Island, the chances of him actually suiting up for the race are being labeled as unlikely. He will almost certainly be fit for the Bathurst 1000 (October 7-10).

Gaunt, thus, appears as the most likely substitute after team owner Paul Morris tried to get American Boris Said and Brazilian Max Wilson out to test the Castrol Commodore VE II today. Other commitments have meant that Gaunt, Morris and confirmed Island endurance driver Tim Blanchard are the only men testing the car today.

Morris confirmed that Gaunt will be hard to go past.

“Daniel has raced V8s all year, he finished every race and he’s more than capable of doing a good job for the team in difficult circumstances, so he’d be hard to go past if he has a good test,” Morris said.

“I offered Boris the opportunity, but he had a commitment to race in the NASCAR Nationwide Series in Montreal on the weekend. He won, so it looks like he made the right decision!

“He’s still very keen on coming over and there’s the possibility of running him in a driver evaluation day later this week, but the test is fairly crucial.

“We’ll wait and see how it goes and also give Murph every possible chance to recover in time.”