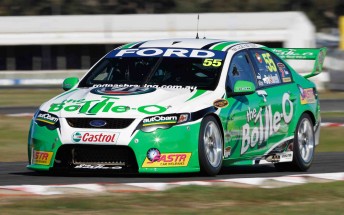 For a young driver, 28-year-old Paul Dumbrell has ‘been there and done that’ in V8 Supercars. He’s done it all – except stand on the podium.

Entering this year’s V8 Supercars endurance races at Phillip Island and Bathurst with team-mate Dean Canto, Dumbrell is in the best position to spray the champagne – if not win.

Dumbrell, driving the third Ford Performance Racing Falcon FG, has been a star performer on occasions this season. Coupled with Dean Canto’s speed, they should be considered an outside hope of a podium place.